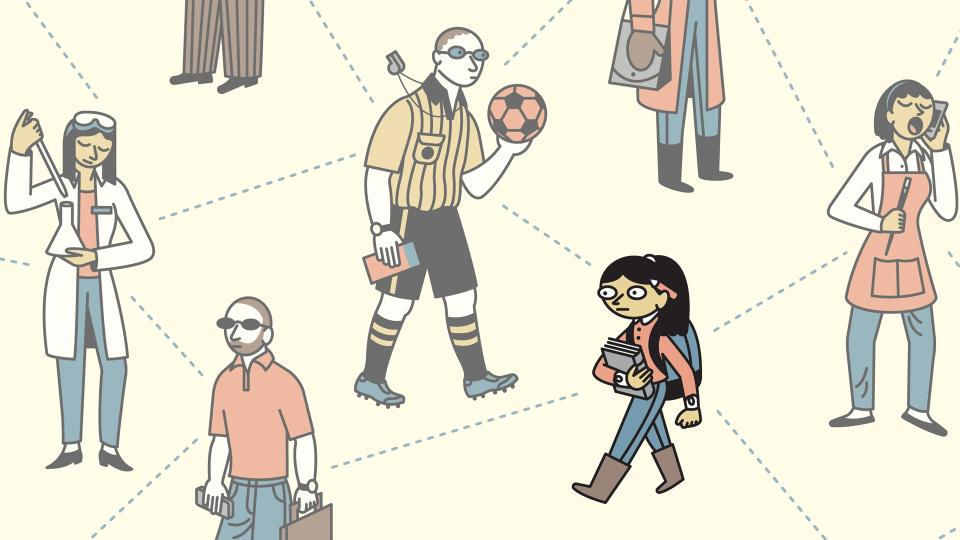 We Americans like to think of ourselves as “rugged individualists” – in the image of the lone cowboy riding toward the setting sun, opening the frontier.But at least as accurate a symbol of our national story is the wagon train, with its mutual aid among a community of pioneers. Throughout our history, a pendulum has slowly swung between the poles of individualism and community, both in our public philosophy and in our daily lives. In the past half century we have witnessed, for better or worse, a giant swing toward the individualist pole in our culture, society, and politics. At the same time, researchers have steadily piled up evidence of how important social context, social institutions, and social networks – in short, our communities – remain for our well-being and our kids’ opportunities.

Social scientists often use the term social capital to describe social connectedness – that is, informal ties to family, friends, neighbors, and acquaintances; involvement in civic associations, religious institutions, athletic teams, volunteer activities; and so on. Social capital has repeatedly been shown to be a strong predictor of well-being both for individuals and for communities. Community bonds and social networks have powerful effects on health, happiness, educational success, economic success, public safety, and (especially) child welfare. However, like financial capital and human capital, social capital is distributed unevenly, and differences in social connections contribute to the youth opportunity gap.

Many studies have shown that better-educated Americans have wider and deeper social networks, both within their closest circle of family and friends and in the wider society. By contrast, less-educated Americans have sparser, more redundant social networks, concentrated within their own family. (By “redundant,” I mean that their friends tend to know the same people they do, so they lack the “friend of a friend” reach available to upper-class Americans.) In short, college-educated parents have both more close friends and more nodding acquaintances than less-educated parents.

Class matters for the density of “close” friendship – the sort of “strong ties” that can provide socioemotional and (in a pinch) material support. Holding race constant, parents in the top fifth of the socioeconomic hierarchy report about 20-25 percent more close friends than parents in the bottom fifth.

Perhaps more important, more-educated Americans also have many more “weak ties,” that is, connections to wider, more diverse networks. The reach and diversity of these social ties are especially valuable for social mobility and educational and economic advancement, because such ties allow educated, affluent parents and their children to tap a wealth of expertise and support that is simply inaccessible to parents and children who are less well-off.

College-educated parents are more likely to “know” all sorts of people. This weak-tie advantage is especially great when it comes to occupations that are most valuable for their kids’ advancement – professors, teachers, lawyers, medical personnel, business leaders – but it is visible even among more traditional working-class connections, like police officers and neighbors.

On the contrary, lower-class parents’ social ties are disproportionately concentrated within their own extended family (and perhaps a high school friend and a neighbor or two), who, because of their own location in the social hierarchy, are unlikely to expand the reach of the parents. Though more-educated, affluent parents have a quantitative edge in the size of their personal networks, even more important is their qualitative edge, in terms of what their friends and acquaintances can do for them and their kids.

Upper-class parents also enable their kids to form weak ties by exposing them more often to organized activities, professionals, and other adults. Working-class children, on the other hand, are more likely to interact regularly only with kin and neighborhood children, which limits their formation of valuable weak ties. When adjusting to college, choosing college majors, and making career plans, kids from more affluent, educated homes engage a wider array of informal advisers – family members, faculty, and outsiders – whereas kids from poor families typically consult one or two members of their immediate family, few if any of whom have any college experience at all. In short, the social networks of more affluent, educated families amplify their other assets in helping to ensure that their kids have richer opportunities.

Connections are important not merely for getting into top schools and top jobs. At least as important as the pipeline from a prized internship to a corner-office job are the ways in which social capital can protect privileged kids from the ordinary risks of adolescence. Studies during the past 40 years have consistently shown that, if anything, drug usage and binge drinking are more common among privileged teenagers than among their less affluent peers. What is different, however, are the family and community “air bags” that deploy to minimize the negative consequences of drugs and other misadventures.

Mentors and “savvy” adults outside the family often play a critical role in helping a child develop his or her full potential. Careful, independent evaluations have shown that formal mentoring can help at-risk kids to develop healthy relations with adults (including parents), and in turn to achieve significant gains in academic and psychosocial outcomes – school attendance, school performance, self-worth, and reduced substance abuse, for example – even with careful controls for potentially confounding variables. These measurable effects are strongest when the mentoring relationship is long-term, and strongest for at-risk kids. (Upper-class kids already have informal mentors in their lives, so adding a formal mentor does not add so much to their achievement.) Measurably, mentoring matters.

Those national averages, however, obscure substantial class differences in access to mentoring. Informal mentoring is much more common among upper- and upper-middle-class kids than among lower-class kids.

For virtually all categories of informal mentors outside the family – teachers, family friends, religious and youth leaders, coaches – kids from affluent families are two to three times more likely to have such a mentor. Privileged children and their less-privileged peers are equally likely to report mentoring by a member of their extended family, but family members of privileged kids tend to have more valuable expertise, so family mentors tend to have more impact on the educational achievements of the privileged kids. In short, affluent kids get substantially more and better informal mentoring.

One consequence of the mentoring gap is to exacerbate the savvy gap – kids from more privileged backgrounds are savvier about how to climb the ladder of opportunity. [Interviews showed that] disadvantaged 18- and 19-year-olds across the country are baffled about school practices, two- and four-year colleges, financial affairs, occupational opportunities, and even programs (both public and private) specifically designed to assist kids like them, such as educational loans. Their less-educated parents’ limited skills and experience explain part of this, but equally important is the fact that these kids lack the dense networks of informal mentors that surround their upper-class counterparts. One poignant example from our fieldwork arose when a working-class dad asked if he could bring along a younger daughter to our interview with his son, just so she could meet an actual college graduate. Any serious program to address the opportunity gap must address the savvy gap and therefore the mentoring gap.

Editor’s Note: This article, which appeared in the October 2015 issue of The Rotarian, provides a nice overview of the issues that Harvard Professor raised in his 2015 book, Our Kids. It describes social capital and how mentors can help redress the growing wealth gap in the U.S.

Kilde: Robert Putnum on why mentors matter : The Chronicle of Evidence-Based Mentoring