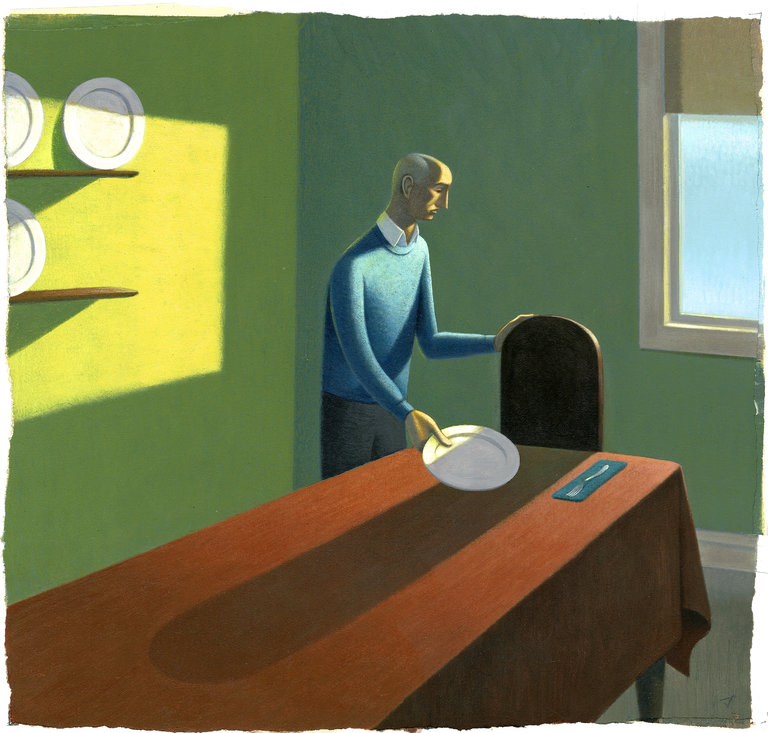 Social isolation is linked to physical illness and to functional andcognitive decline. Programs to reach out to the elderly are growing, particularly in Britain. –

BLACKPOOL, England — The woman on the other end of the phone spoke lightheartedly of spring and of her 81st birthday the previous week.

“Who did you celebrate with, Beryl?” asked Alison, whose job was to offer a kind ear.

And with that, Beryl’s cheer turned to despair.

Her voice began to quaver as she acknowledged that she had been alone at home not just on her birthday, but for days and days. The telephone conversation was the first time she had spoken in more than a week.

About 10,000 similar calls come in weekly to an unassuming office building in this seaside town at the northwest reaches of England, which houses TheSilver Line Helpline, a 24-hour call center for older adults seeking to fill a basic need: contact with other people.

Loneliness, which Emily Dickinson described as “the Horror not to be surveyed,” is a quiet devastation. But in Britain, it is increasingly being viewed as something more: a serious public health issue deserving of public funds and national attention.

Working with local governments and the National Health Service, programs aimed at mitigating loneliness have sprung up in dozens of cities and towns. Even fire brigades have been trained to inspect homes not just for fire safetybut for signs of social isolation.

“There’s been an explosion of public awareness here, from local authorities to the Department of Health to the media,” said Paul Cann, chief executive of Age UK Oxfordshire and a founder of The Campaign to End Loneliness, a five-year-old group based in London. “Loneliness has to be everybody’s business.”

Researchers have found mounting evidence linking loneliness to physical illness and to functional and cognitive decline. As a predictor of early death, loneliness eclipses obesity.

“The profound effects of loneliness on health and independence are a critical public health problem,” said Dr. Carla M. Perissinotto, a geriatrician at the University of California, San Francisco. “It is no longer medically or ethically acceptable to ignore older adults who feel lonely and marginalized.”

While the public, private and volunteer sectors in Britain are mobilizing to address loneliness, researchers are deepening their understanding of its biological underpinnings. In a paper published earlier this year in the journal Cell, neuroscientists at the Massachusetts Institute of Technology identified a region of the brain they believe generates feelings of loneliness. The region, known as the dorsal raphe nucleus, or D.R.N., is best known for its link to depression.

Kay M. Tye and her colleagues found that when mice were housed together,dopamine neurons in the D.R.N. were relatively inactive. But after the mice were isolated for a short period, the activity in those neurons surged when those mice were reunited with other mice.

“This is the first time we’ve found a cellular substrate for this experience,” said Dr. Tye, an assistant professor at the Picower Institute for Learning and Memory at M.I.T. and a senior author of the paper. “And we saw the change after 24 hours of isolation.”

John T. Cacioppo, a professor of psychology at the University of Chicago and director of the university’s Center for Cognitive and Social Neuroscience, has been studying loneliness since the 1990s. He said loneliness is an aversive signal much like thirst, hunger or pain.

“Denying you feel lonely makes no more sense than denying you feel hunger,” he said. Yet the very word “lonely” carries a negative connotation, Professor Cacioppo said, signaling social weakness, or an inability to stand on one’s own.

The unspoken stigma of loneliness is amply evident during calls to The Silver Line. Most people call asking for advice on, say, roasting a turkey. Many call more than once a day. One woman rings every hour to ask the time. Only rarely will someone speak frankly about loneliness.

Yet the impulse to call in to services like The Silver Line is a healthy one, Professor Cacioppo said.

On a recent afternoon, Tracey, a Silver Line adviser, listened as a caller in his 80s embarked on a nostalgic trip down his list of favorite films. The next caller serenaded Tracey with “Oh What a Beautiful Morning,” on his harmonica.

Loneliness is not just an older person’s dilemma, while it does seem to have some major built-in factors. The death of a spouse and long…

Once the harmonica player had hung up, a call came in from an 88-year-old man with an avalanche of memories to share: dogs he had owned, boats he had captained, London during the blitz. Tracey, a former nurse, listened patiently for 30 minutes.

“It can be really fascinating when people talk about things like London during the bombing,” she said after the call ended. “It’s important to remember the rich lives people have led.”

Silver Line workers leave it up to the caller to mention whether they are feeling lonely. Still, the advisers are trained to listen for signs of unhappy isolation, and gently lead the conversation accordingly, perhaps offering to link the caller to a Silver Line Friend, a volunteer who makes weekly phone calls or writes letters to those who request it.

Sophie Andrews, chief executive of The Silver Line, said she was surprised by the explosion of calls shortly after the service began operating nearly three years ago. The Blackpool call center now receives some 1,500 calls a day.

Ms. Andrews said she was most concerned not about those who called The Silver Line, but those who were too depressed by their isolation to pick up the phone. “We need to raise awareness with the people who are the hardest to reach,” she said.

Professor Cacioppo lauds efforts like The Silver Line, yet he warns that the problem of loneliness is nuanced and the solutions not as obvious as they might seem. That is, a call-in line can help reduce feelings of loneliness temporarily, but is not likely to reduce levels of chronic loneliness.

In his research, Professor Cacioppo has shown that loneliness affects several key bodily functions, at least in part through overstimulation of the body’s stress response. Chronic loneliness, his work has shown, is associated with increased levels of cortisol, a major stress hormone, as well as higher vascular resistance, which can raise blood pressure and decrease blood flow to vital organs.

Professor Cacioppo’s research has also shown that the danger signals activated in the brain by loneliness affect the production of white blood cells; this can impair the immune system’s ability to fight infections.

It is only in the past several years that loneliness has been examined through a medical, rather than psychological or sociological, lens. Dr. Perissinotto, the University of California, San Francisco geriatrician, decided to study loneliness when she began to sense there were factors affecting her patients’ health that she was failing to capture.

Dr. Perissinotto is also interested in examining the link between loneliness and suicidal thoughts, as there has been little research in that area. She hopes to study The Friendship Line, a 24-hour, toll-free, loneliness call-in line run by the Institute on Aging in San Francisco that is also a suicide prevention hotline.

Although plenty of research into loneliness takes place in the United States, Britain remains well ahead in addressing the problem.

“In the U.S., there isn’t much recognition in terms of public health initiatives or the average person recognizing that loneliness has to do with health,” said Julianne Holt-Lunstad, a professor of psychology at Brigham Young University, whose studies also link loneliness to deteriorating health.

Age UK, an organization similar to AARP in the United States, oversees an array of programs aimed at decreasing loneliness and coordinates efforts with fire brigades to look for signs of loneliness and isolation in the homes they enter.

Another charity, Open Age, runs some 400 activities each week in Central London — sewing circles, current events discussions, book clubs and exercise and computer classes, held at church halls, sport centers, housing projects — and its employees also visit people in their homes to try to get them out and about.

“We try to work out what it is that’s preventing them from leaving the house,” said Helen Leech, the organization’s director.

Men and women differ greatly in how they grapple with loneliness. Seventy percent of the calls to The Silver Line are from women.

“We have this kind of male pride thing,” said Mike Jenn, 70, a retired charity worker who lives in London. “We say, ‘I can look after myself. I don’t need to talk to anyone,’ and it’s a complete fallacy. Not communicating helps to kill us.”

Mr. Jenn runs a “Men’s Shed” in London’s Camden Town district, which aims to bring older men together in a more familiar and comfortable environment — working side by side in a woodworking shop. The concept began in Australia and has since spread to Britain: There are now more than 300 Men’s Sheds throughout England, Scotland and Ireland.

Keith Pearshouse, 70, a retired school principal, discovered the Men’s Shed near his home after moving to London from Norfolk, England, in 2007 and recognizing he was lonely.

“I was a bit anxious walking into a roomful of people,” said Mr. Pearshouse, chatting amid the din created by a table saw, router and lathe at the Camden Town shed, a 700-square-foot workshop in a local community center. “But I immediately thought, ‘Yeah, this is a place that would work for me.’”

Mr. Pearshouse, who had never worked with wood before he discovered the Men’s Shed, showed a visitor a delicate wooden jar he was finishing. The pieces he produces are gratifying, he said, but not nearly as gratifying as the human connections he has made.

While Mr. Pearshouse is still a long way from sharing every little ache and upset with his friends at the shed, he said his life would now feel much emptier without the shoulder-to-shoulder way of confiding he has come to know. As he spoke, he took the lid off his jar, and it gave a slight pop, signifying a perfect fit.