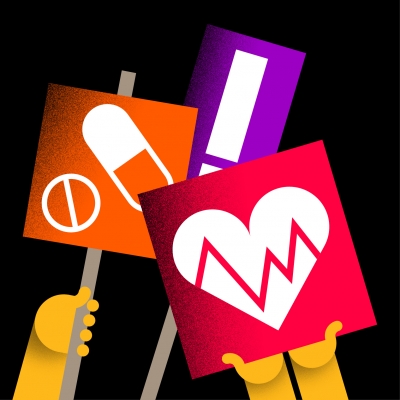 In 2017, we’ll see more people uniting to fight for better health and care, enabled by digital technology, and potentially leading to stronger engagement with the system, says Nesta Health Lab.

Dramatic social change has been driven time and again by people coming together in social movements to fight for rights, solve problems, shift how people think, support each other and demand what they need.

This can be clearly seen in health, where there are incredible stories of the power of passionate people working together to drive change, not just in the healthcare system, but in the wider culture and environment in which health and healthcare happen. They use social media, protests, campaigns, self-organising, sharing knowledge and other means to change minds and systems.

In 2017, we predict that we will see even more people standing up, speaking out and seeking change in the health and care issues that matter to them and their loved ones. And they will do so in social movements that are ‘next generation’ in their use of digital technology to mobilise and the issues they address.

The rise of social movements for health

There is a lot to learn from the social movements that have preceded us. British abolitionism in the 1780s has been described as the first social movement and used tactics recognisable today in the struggle to end slavery. Disparate groups including religious communities and Enlightenment rationalists pooled resources and skills, and used creative tactics: protests, direct action, and legal challenges as well as the mass media of the day including sermons, pamphlets and petitions.

Since then we have seen movements that have engaged with all the cultural, political, legal and biomedical dimensions of health. For example, the disability rights movement and HIV/AIDS campaigns have engaged with social attitudes, stigma and justice. In doing so, they brought vital change to health systems that also benefited people far beyond their originating communities. The breast cancer movement has addressed the deep cultural stigma associated with the disease, given women the words to explain their experiences, and changed the culture of care.

Earlier this year, Nesta explored the power of people to improve health and wellbeing through social movements. It is clear that health-focused social movements have been effective at putting pressure on systems to accelerate transformation, respond directly to the experiences of people and diffuse change widely across populations. They are driven by people with empathy and experience of problems, and their different perspective allows for truly fresh ideas. They are an important source of people-powered innovation.

They will be increasingly enabled by digital technology, with movement leaders and members communicating, collaborating and coordinating across nations and continents without ever meeting in person. More members will broadcast their causes over social media and reach global audiences rapidly through digital channels. This will continue to change the face of how social movements are able to spread, using online campaigns to raise awareness in ways that also achieve tangible goals.

This ability to initiate and join social movements more easily coincides with increasing challenges that social movements will engage with. There are major uncertainties in the future of health and care. Critical questions about NHS and social care budgets, control of data and the personalisation of healthcare, for example, will lead to increasing debate and mobilisation over the future of health and care.

Technology will help new social movements to easily share skills, advice and ideas, building on models like Crohnology where people with Crohn’s disease can connect around the world to develop evidence bases and take charge of their own health.

Digital platforms will also help social movements to effectively influence policy and research. Platforms such as Patients Know Best and Patients Like Me (both developed by people with experience of rare diseases) are already used to share knowledge, and to improve care, by connecting consultants and GPs where official systems have been painfully slow or prone to failure. In the US, Genetic Alliance’s set of patient organisation-run biobanks and registries allow citizen groups to drive research forward.

Technology can also support social movements by bringing the world closer to people’s experiences. Recently, a 17-year old Minnesota student found that sharing her story of sexual assault enabled her to triumph over stigma. She launched I am Movement where women share experiences of mental illness, racism or sexual assault.

So, in 2017 it will be easier than ever to initiate and spread a health social movement, and digital platforms will also enable emerging issues to be grappled with in new ways.

The challenge – and the opportunity

Social movements are agile and dynamic but also messy and turbulent. They often make society, elites and institutions deeply uncomfortable as they challenge accepted values, norms, priorities and procedures. While it is becoming easier to initiate social movements, there are real difficulties for established health and care organisations to work alongside people who are ‘raging and roaring’.

But social movements are also a valuable source of change based on what matters most to people. The challenge therefore is how social movements and the health and care system can engage in ways that forge new paths and develop ‘win-win’ solutions, rather than fight in zero sum terms.

For this to happen, new models of engagement need to be developed, building on NHS Citizen and other work; deliberative mechanisms which can draw on the efficiency and scale of institutions and the dynamism and agility of movements. It will require humility and openness to change on the part of institutions alongside continued work on core issues including:

Getting this right in health and care creates an opportunity for valuable spillover benefits in terms of strengthening civic and democratic engagement and addressing issues such as wider inequalities. If people feel able to express and address something as personal and fundamental as health, there may be opportunities for this engagement to contribute to other complex and contentious social challenges.